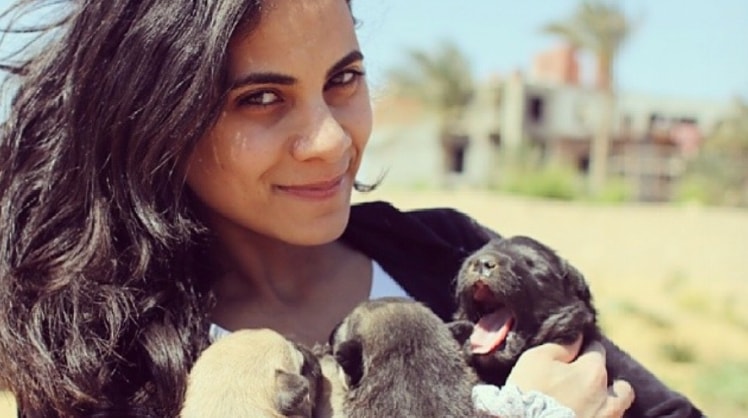 Lover of all paws..

Salma here, I recently relocated to Düsseldorf from Egypt for work and even before I come here, on my to-do list was volunteer in animal shelters or find any job that has animals involved in it. Reason for which is I LOVE animals, for as long as I can remember, literally all animals, there's a special place in my heart for dogs though. I have no pets now as unfortunately due to constraints on the apartment here in Düsseldorf, no pets were allowed. But throughout my life, I raised cats, guinea pigs, hamsters, birds and dogs. My own was a Malinois female dog called Lisa.

I also come from a country that sadly has way too many stray animals and so for the past couple of years, I tried to take in as many as I could, take care of them till I could find them good homes.. my biggest challenge I would say is when I found 6 kittens less than a week old, whom their mother died when she got hit by a car and I took them in, I have to say that it was the most challenging, rewarding satisfying experience of my life. From round the clock bottle feeding, keeping them warm, stimulating urination, litter box training, and then when they were ready, finding them good homes. I never knew about that before, but I had to learn so I did and seeing them running around eyes wide open and happy in their forever homes was the most fulfilling thing ever. 'I added some pictures of my kitten journey so you can see :) '

I also took care of many dogs in my life, mostly bigger dogs, my own Malinois, and a couple of German shepherds. Dogs to me, are the most amazing, most loyal, and loving creature. I gave dogs baths before, I have so much experience with removing fleas and ticks as some of the dogs I took care of were raised in a farm so that was something I did on a regular basis.

Dogs, or cats or any other 4-legged creature, I would be honored if you can trust me with your buddy, to be their friend for some time, and I promise I'll do my best to make it the most loving affectionate time. Because honestly, you would be doing me a favor just as much as I would be to you, spending time with animals is one of the things that make me the happiest, and I would truly cherish this opportunity!

Salma took great care of my cat when I was away, and updated me with photos and videos everyday, making me feel comfortable to leave for a few days. Would definitely recommend!

Thanks for everything! Felt very confident that the cats were in good hands.

Lover of all paws..